What do beetles want?

It may be only kids, scientists, artists and designers who see in beetles something to celebrate. Entomologists certainly appreciate beetles’ remarkable niche-finding evolutionary ability to adapt to most environments and climates on earth. We know beetles are successful because there are 400,000 species collected, many of which have yet to be officially described. Artists and designers likely see in some beetle species glorious color and symmetry (and stripes and polka dots), for in few other insects do we find such astonishing flamboyance. And kids just think most insects are pretty cool, especially beetles and butterflies.

Tortoise Beetle in the subfamily Cassidinae of the leaf beetles, or Chrysomelidae, Las Cruces Biological Station

I first learned about beetles, the order of Coleoptera, in elementary school discussions of the cotton boll weevil, such powerful pests that they changed economic conditions in the cotton-dependent southern United States. The boll weevil lays its eggs inside cotton bolls, and the larvae eat their way out. Weevils–Curculionidae–constitute the largest family of beetles; in fact, they are the largest group of living organisms, with 60,000 described species.

What do beetles want? Most want to live on or inside their food source. In my own nature reserve, Finca Cántaros, I see them embedded in rotten wood, chewing or sucking their way through heliconia petioles, flowers, palms, cacao pods, coffee beans, and leaves of countless plants and trees. Dung beetles…well, you know what they do. Beetles are more numerous within the high biodiversity of the tropics: there are simply more species of everything for insects to eat due to higher heat, more abundant rain and sunshine than in temperate zones.

Beetles also want us!  I learned that beetles from eleven different families feed on vertebrate carcasses and human cadavers. I’ve been leaning toward cremation for my post-mortem remains, but now I’m certain that is the way to go! As fond as I am of beetles, I must admit I don’t like contemplating being a food source for them; and the choice of cremation does seem to favor more responsible land use. 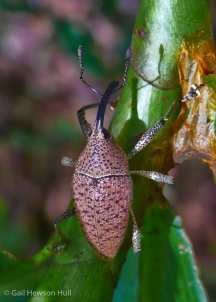 While many beetles are pests, eating their way through the zinnias and roses in our flower gardens as well as forests of pine trees, groves of citrus, and many other trees and crops, other beetles have a positive role as major pollinators. The US Department of Agriculture site states that beetles are responsible for pollinating 88% of the 240,000 flowering plants globabally. (And I always thought bees deserve most of the credit!) Fossil records show that beetles were pollinating the earliest flowering plants on earth in the Mesozoic period–about 200 million years ago. Many current day plants, such as the Magnolia, a primitive angiosperm, have pollination relationships with beetles that have very ancient evolutionary beginnings. 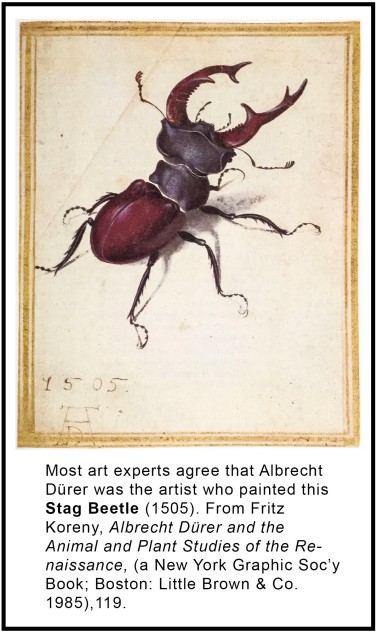 And some beetles, such as Carabid ground and tiger beetles that live on the surface of the soil, are important consumers of destructive pests, like aphids, caterpillars, maggots, and slugs.

Anyone who enjoys readings in natural history has probably come across the musing by J. B. S. Haldane, a Scottish biologist and geneticist, while he was attending a meeting of the British Interplanetary Society in 1951. Reflecting on the fact that there are 400,000 species of beetles, as opposed to 8,000 species of mammals, he quipped, “The Creater, if He exists, has a special preference for beetles.”

As an artist and photographer myself, I have thrilled to rare discoveries in the wild of a flashy or bizarre beetle. To have the opportunity to photograph them is a gift. I have also admired artists, going all the way back to Albrect Dürer (a gifted German who lived from 1471-1528–see sidebar), who find inspiration in the “smaller majority” of life–the insects. Scientists never lose the urge to understand the world, and artists recognize in beetles some of our world’s highest creative achievements.