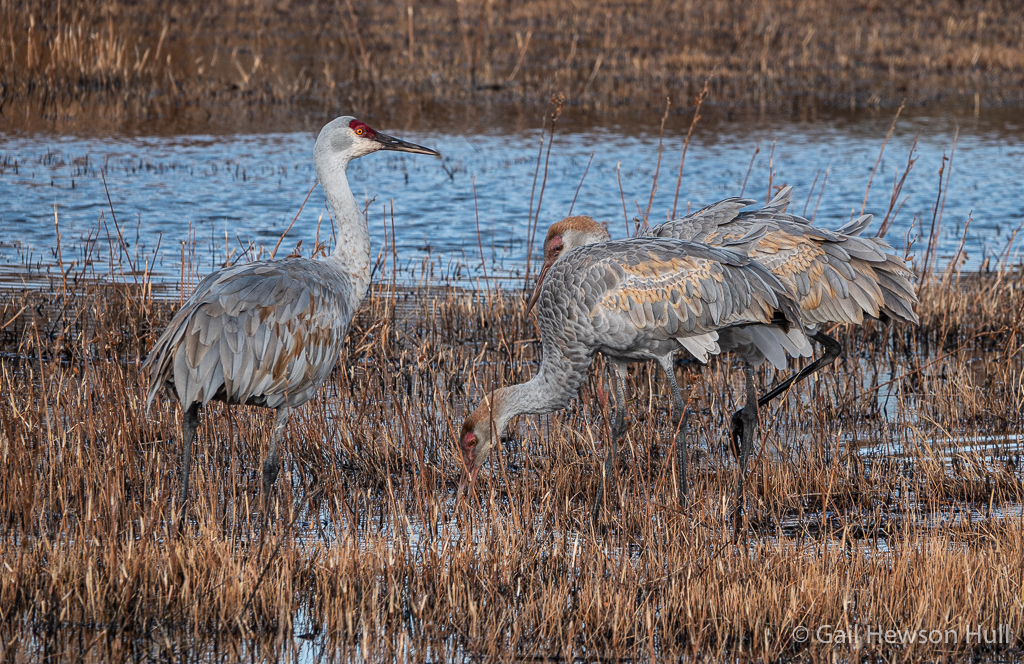 As some of the readers of Foto Diarist already know, “Georgie”, my mother, passed away at the end of last October,  just short of her 99th birthday. It was a peaceful passing, with help from Hospice care, and my sister and I were fortunate to be by her side at home at the end of her long and mostly healthy life.

After Georgie’s death, Harry and I made our first New Mexican overnight getaway in mid-November. We drove about 90 miles south of Albuquerque to a refuge renown for migrating waterfowl in the Middle Rio Grande Valley: Bosque del Apache National Wildlife Refuge (the “Bosque”, as it’s often referred to by New Mexicans). We spent two nights at a cozy and well-managed B&B named Casa Blanca in the tiny town of San Antonio, just minutes north of the Refuge entrance. 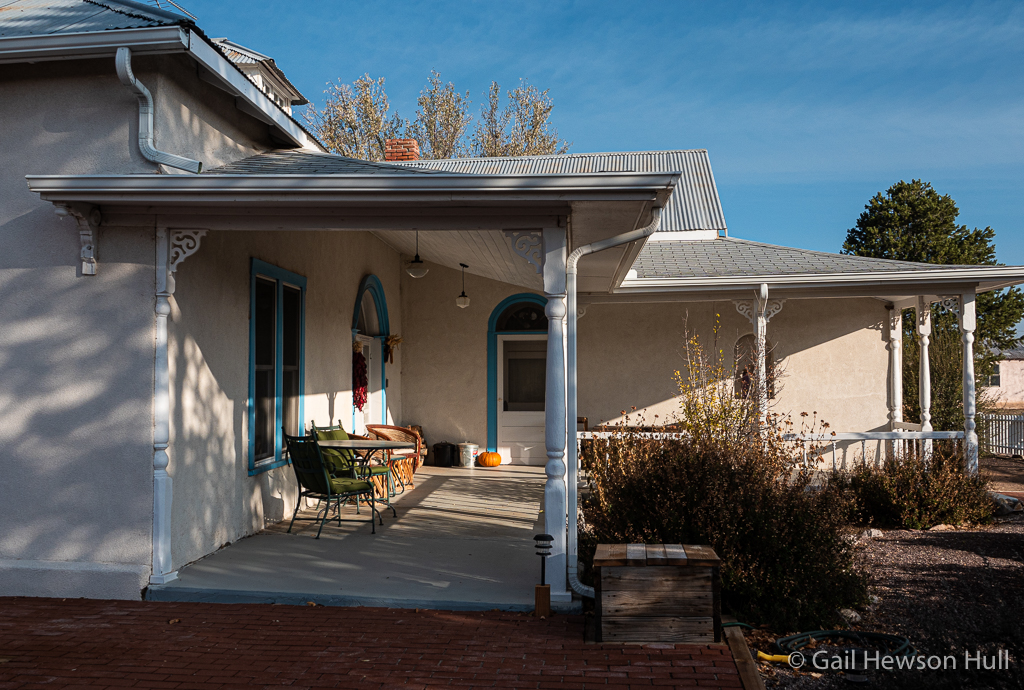 Over two days we saw javelina (white-collared peccary) unafraid of us, striped skunks with black tails held high above the golden grasses as their bodies remained hidden, many bird species, and the unforgettable flight and feeding activities of Sandhill Cranes overwintering at the refuge. With their wingspans of up to seven feet, these grey birds 40″-48″ high are a sight to behold. The Snow Geese were our first sightings of these birds, and they seem to migrate and have affinity with the cranes.

Not very long ago the cranes were in severe decline, but now they are considered to have relatively stable populations, thanks to the efforts of many environmental organizations including Audubon, National Geographic, BirdLife International and the Cornell Lab of Ornithology, along with community partners along migration routes. Having just joined Audubon NM, I am learning about its statewide efforts to restore sections of the Rio Grande and Gila Rivers for the benefit of birds like Sandhill Cranes. The futures of these and other aquatic birds are not at all secure if rivers continue to be drained, diverted and dried-up because of agriculture and the climate crisis in already-arid areas like New Mexico. 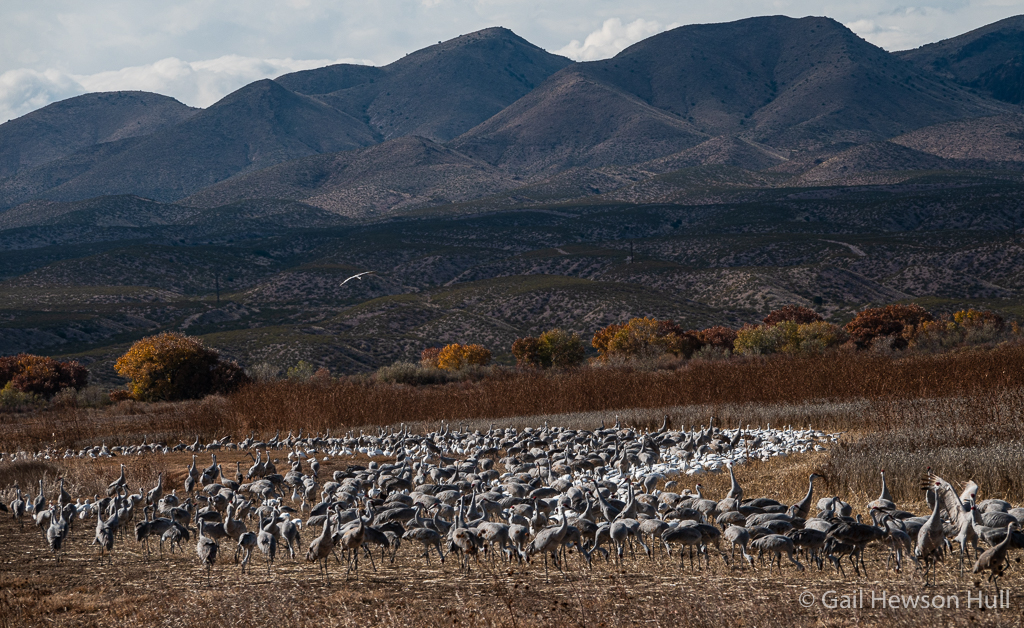 The Bosque del Apache Refuge’s wetlands are aggressively managed to ensure there is enough food and water for the large variety of migratory and non-migratory wildlife. The infrastructure employed of channels, watergates and dams to mimic natural wetlands is impressive. The thousands of cranes and Snow Geese are seen feeding by day in large fields of sweet corn and alfalfa in the region around and in the refuge itself. At sunset visitors are enthralled as the birds return, honking raucously in mixed-sized flocks, landing gracefully in the flooded areas of the refuge. My heart was pounding at the primordial spectacle. Floating in the wetlands while sleeping, the cranes, geese, ducks, mallards, coots, grebes, scaups and other aquatic birds are safe from predators like wildcats, foxes and coyotes. 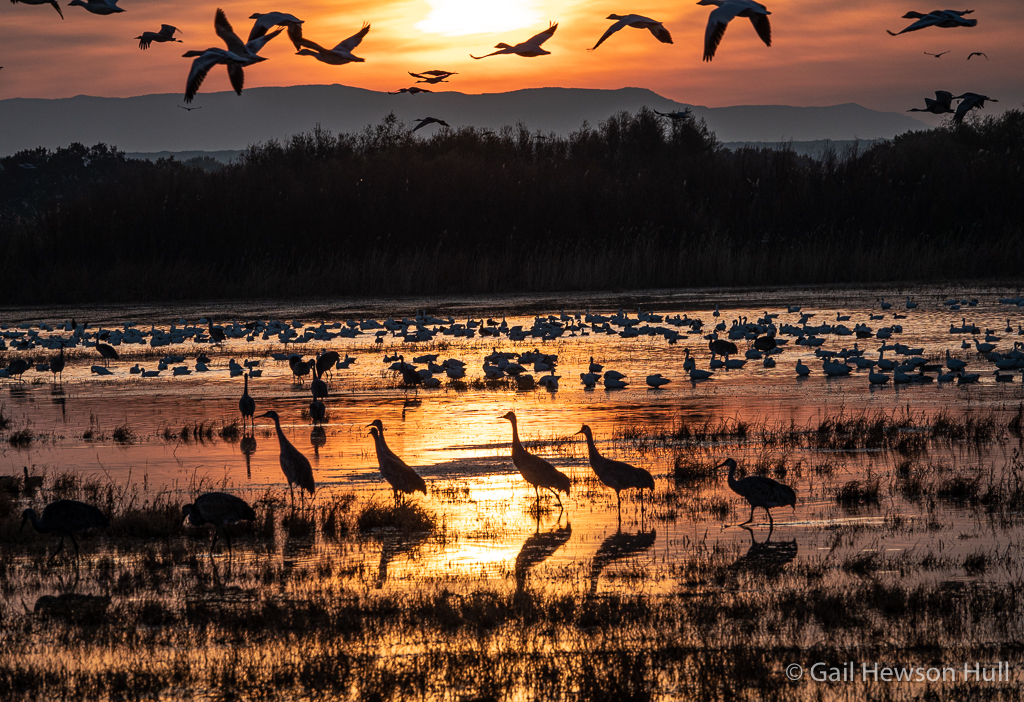 Sunset in the Refuge as cranes return to roost

Curious visitors as well as passionate birders also assemble in the cold of the dawn and its dramatic early light to observe the tremendously moving display–repeated daily in winter for millions of years ?–of Sandhill Cranes and Snow Geese lifting off almost in unison and communicating with each other noisily as they instinctively head out for new feeding grounds. None of the glowing reports I’d heard beforehand did justice to the experience. You just have to be there! 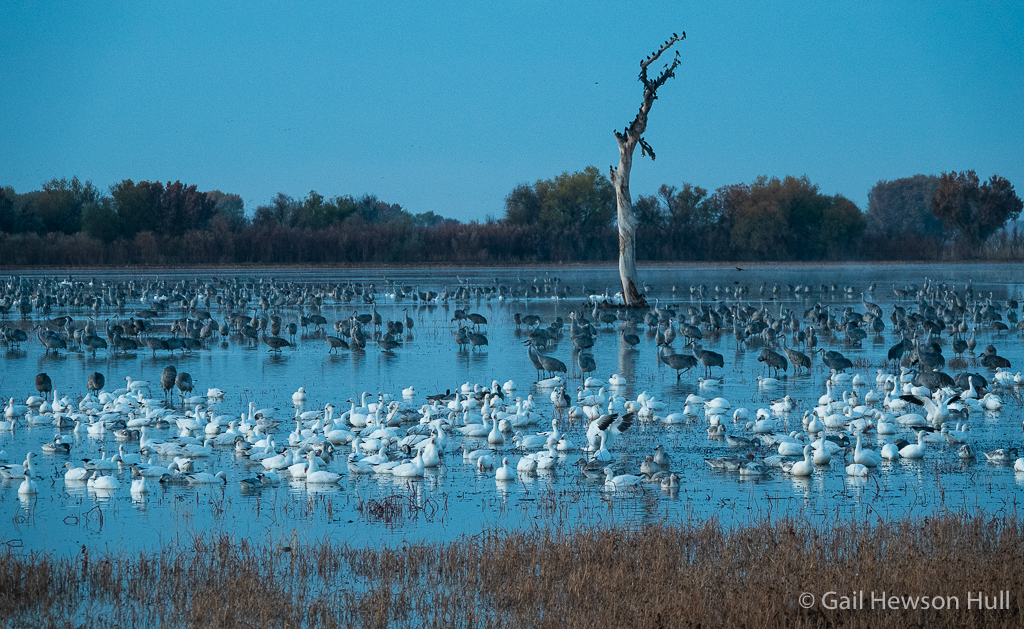 Dawn, as birds are preparing to take off 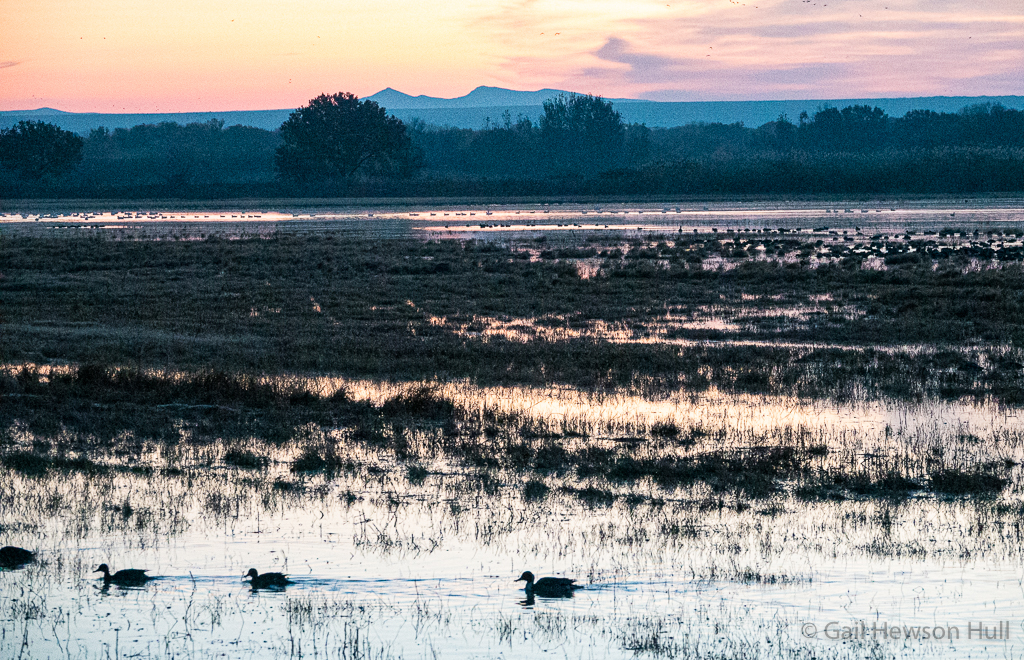 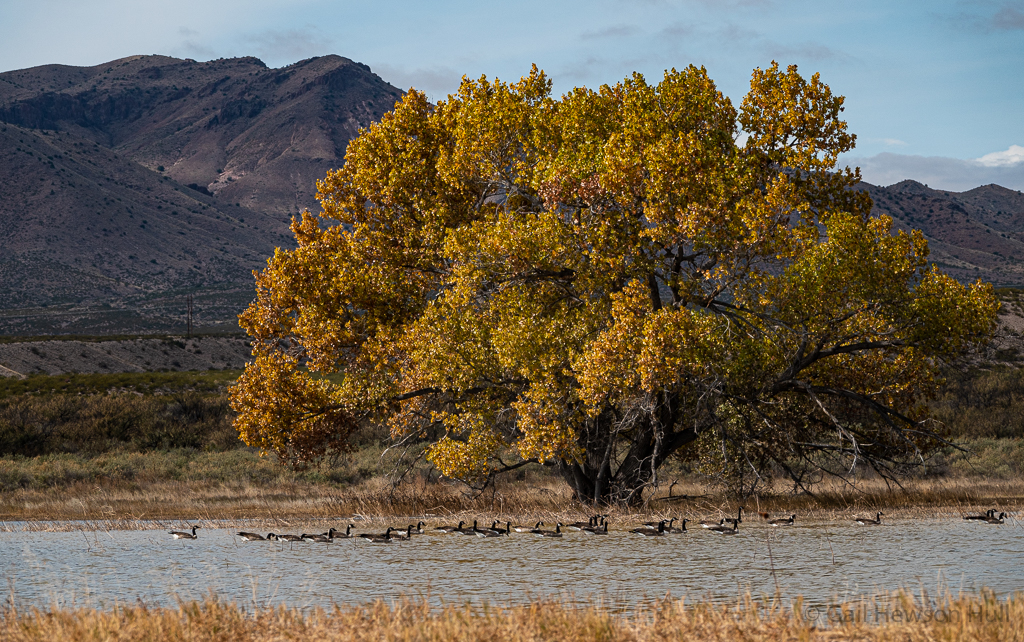