When the winter rains of Costa Rica are upon us in August, I don’t expect to see avifauna tending their young or building new nests. However, that’s exactly what resident Blue-Black Grosbeaks are doing when rainfall measures between one-half to one inch of rain at least three days a week, and it rains most days of the month at this time of year. Nests built when torrential rains are common must be strategically constructed under protective leaves so the nests stay intact and the hatchlings stay dry.

In the first week of August my friend Alison Olivieri took me to observe activity around a nest at the forest edge behind the Wilson Botanical Garden, part of OTS’ Las Cruces Biological Reserve. We watched from a distance as the adults kept a wary eye on us, and both the female and male made visits to the nest in the half hour we watched. Seven days later I went back to observe from a hillside about 22 feet away, with better afternoon light on the vegetation the adults used as a safe staging area before approaching their nest.

Female Blue-black Grosbeak casts a glance at me before carrying food to the nest.

During the seventy-five minutes in early afternoon that I sat on the ground observing, the female visited the nest twice and the male visited once. Communication between the parents while they searched for food was with loud metallic “chinks”, typical of the species.*

Grosbeaks are seed-eaters and -crushers. Their diet is mostly vegetable, including grass and bamboo seeds, maize, and the dark blue fruits of Psychotria brachiata in the coffee family (Rubiaceae). Young are fed mostly mashed vegetable matter, but insects may occasionally be part of the menu. 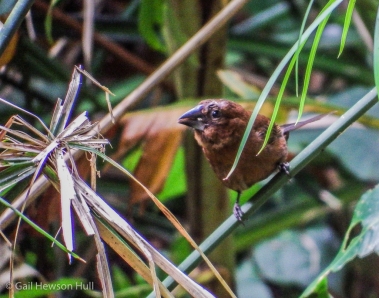 Female carrying food looks around carefully to be sure it is safe to approach the nest.

What I have learned is that nest building among Blue-black Grosbeaks in Costa Rica occurs mostly in July-August, but earlier in some areas, including the wet Caribbean lowlands. Some pairs have two or three broods in a year. Both parents help with the building of the nest, which is an open cup made from fine twigs, coarse fibers and rootlets. The Handbook of the Birds of the World reports that nests are placed between 0.3 and 5 meters up in spiny palms, tree ferns, or similar small trees. Indeed, the Las Cruces nest I observed was only two feet (0.6m) from the ground and sure enough, was attached to bromeliads and epiphytes on an old tree fern.

The clutch usually has two eggs, as was the case with the Las Cruces nest. The female is alone responsible for incubation, and she is fed “to a variable degree” by the male. However, both parents feed their young for a period of 11-12 days.

These birds are quite shy, and I hadn’t seen them on my own property, Finca Cantaros, until the last week of August. At dawn on the 23rd, armed with my newfound acquaintance with the species, I found a pair in the early morning fog; both were carrying nesting material.

Our property lies at 1187 m above sea level; 1200 m is reported to be the high point of their range. Fortunately, the reclusive Blue-black Grosbeaks have a healthy population and are not globally threatened. Their range is from Southeastern Mexico to Bolivia and Amazonian Brazil. 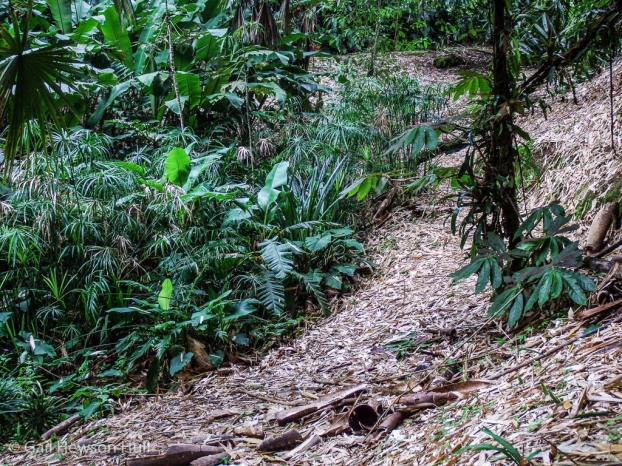 The nest was located in the tree to the right, just two feet above ground and carefully placed under sheltering leaves of Columnea polyantha, a Gesneriad I discussed in a recent post.

Having observed these hardy birds with their impressive bills, gathering food and feeding their young, I now feel a real fondness for them. Until Alison took me to see the nest, staying a respectful distance from it with the hope of seeing the adults, I didn’t even know of the existence of Blue-black Grosbeaks in my neighborhood. This is just another example of the importance of familiarizing people with the natural world. It’s really only when I’ve learned about the daily life of a bird or a mammal or even a plant–and become aware of its challenges to survive, its friends and its enemies–that I begin to care about it in an active way. Maybe this is because our conscious minds allow new knowledge and new friends to settle into new territory of our brains. We become vigilant on their behalf. It is an almost autonomous process I have come to love.

Handbook of the Birds of the World, digital edition.

A Guide to the Birds of Panama by Robert S. Ridgely and John A. Gwynne, Jr.

Male Blue-black Grosbeak seen with nesting material on August 23, 2016 at Finca Cantaros, 6:00 AM