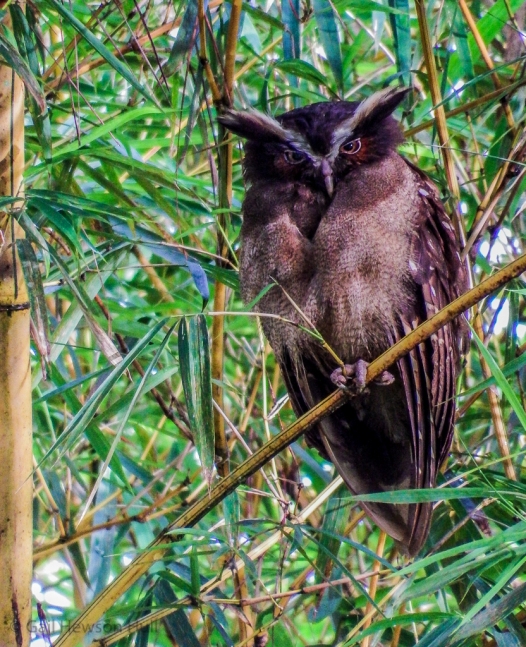 There is no doubt that people are drawn to owls. They are quiet, except when calling out at night while looking for a mate, and their nocturnal habits of silent flight and binocular vision are intriguing and mysterious to us. They have roundish faces (like our own) and large penetrating eyes, suggesting a seriousness to which we ascribe wisdom. Farmers value Barn Owls because they protect grains from rodents. While most birds fly off nervously at the approach of Homo sapiens, owls seem indifferent to us, sometimes sleeping through observers’ excited whispers about spotting such an uncommon creature. There is something almost talismanic about these birds of prey that inspire many of us to collect owl-themed art, t-shirts, crafts, or knick-knacks. And this week I learned that a young friend is heading next month to Warren Wilson College in North Carolina, a small liberal arts college with a strong curriculum in environmental and conservation sciences. The college’s mascot? The owl! 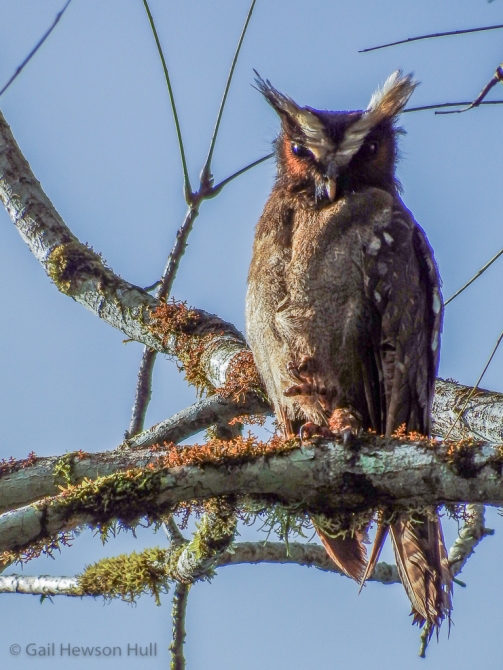 On June 24th an 11-year old boy in the “Earth Caretakers” youth group (“Guardianes de la Tierra”), from the nearby town of Sabalito, spotted a Crested Owl (Lophostrix cristata Stricklandi) in a tall bamboo clump near our Laguna Zoncho at Finca Cántaros. In Spanish it is known as Bújo corniblanco or Búho penachudo. As word has gotten around, there has been a steady stream of birders eager to see Costa Rica’s second largest, strictly nocturnal owl. It is rare in some areas and fairly common in other parts of the country, but it is certainly the first time we have seen it in our 22 years at Finca Cantaros.

The Crested Owl’s habitat extends from sea-level up to 1900 m with one sighting in a Honduran cloud forest at 1950 m. Three subspecies of Lophostrix cristata are recognized, and our current resident is the dark morph (variant form of a species of organism*) of the subspecies Stricklandi, first described in the year 1800 and now found from S. Mexico to W. Panama. The “dark morph”, as in this case, has a blackish face and forehead, dark rufous around eyes, eyes usually yellow-orange, as opposed to the pale morph, with facial disc tawny to chestnut, underparts plain buffy-brown to pale grey-brown, iris dark brown. (The other two subspecies are in South America.) The Crested Owl weighs between 400-620 grams (14 oz to 1 lb 5 oz) and measures 36-43 cm (14 to 16.9 inches).

When “our” owl disappeared for the day July 12, I went underneath its perch of the last 18 days to search for signs of what it might be eating. Strangely enough, there were no visible droppings whatsoever. My interpretation of this lack of evidence of digestive processing is that the owl only poops when it flies. The reference literature says that the Crested Owl eats mostly beetles, roaches, caterpillars and other orthopterans, but may also eat small vertebrates. Happily, on July 13 the owl was back on the same branch, with its excellent view of the lake edge, where frogs, lizards, and snakes surely move about at night. I hope it will continue to find prey so that we, and visitors to the reserve, can appreciate it for many weeks to come. 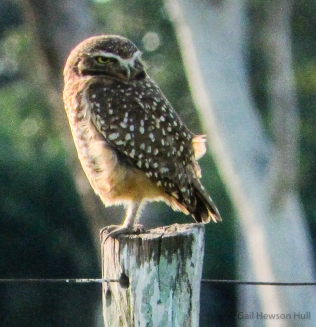 Burrowing Owl, Athene cunicularia, photographed in the Pantanal region of Brazil, 2013. This diurnal species uses the holes of small mammals in which to create a nest made of dried cattle dung, automatically attracting insects to feed chicks. During the day they rest on cattle fence posts.

Handbook of the Birds of the World Alive.