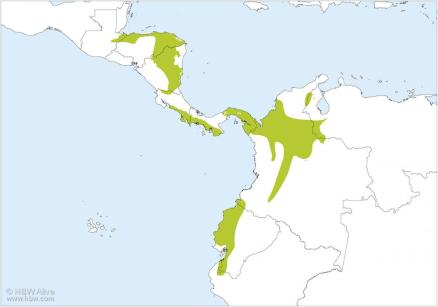 Even a bird that weighs only about half an ounce (11 g) and stands 3.5 inches (9 cm) is not to be taken lightly. The Olivaceous Piculet may be small in stature, but it has proven to be quite robust in its success, extending its population from Guatemala in Central America to northwestern Venezuela and western Ecuador in South America. In Costa Rica the Piculet is the smallest woodpecker, found fairly commonly in  the southern Pacific lowlands, slopes and valleys up to 1400 m, but not found in the more humid Golfo Dulce area. It’s described as uncommon in a region called Caño Negro in north-central Costa Rica, near the Nicaragua border. Currently there are six subspecies of Picumnus olivaceous recognized from Guatemala to Ecuador. I suspect from my readings that there may be a name change in this little woodpecker’s future as it pertains to Costa Rica, Panama, and extreme NW Colombia.

The Olivaceous Piculet was first described in 1845 by a French aristocrat, Baron Nöel Frédéric Armand André de Lafresnaye in Bogotá, Colombia. In his early life Lafresnaye took an interest in natural history, especially entomology, but upon acquiring a collection of European bird skins, he decided to turn his whole attention to ornithology. His explorations and eventual collection of nearly 9000 specimens eventually found its way to the ornithology department of the Museum of Comparative Zoology at Harvard University. And that is where you could visit that first Olivaceous Piculet from Bogotá, the type specimen.

The Olivaceous Piculet is fairly common at Finca Cántaros, and shortly after I decided to choose the Piculet as the subject of this post, two Tico photographers who work at the Monteverde Cloud Forest Biological Reserve in Costa Rica’s northern highlands visited our property and proclaimed, upon leaving, that the sighting and photos they were most happy with were those of the Piculet. 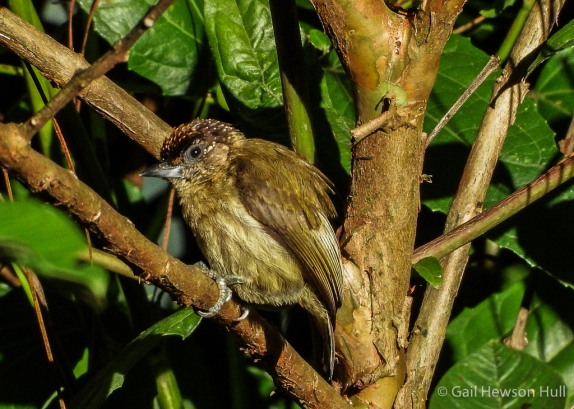 Able to find its foods of ants and termites, larvae and pupae, beetles and cockroach eggs at both lower and middle elevations, even up to 1400 meters, the Piculet has adapted to a wide variety of habitat. It prefers secondary forest, garden edges, borders of humid rainforest and cloud forests (but not Monteverde), usually foraging at lower and medium levels. In one of my encounters with this charismatic bird, I was able to stand barely six feet away as it went about its business seemingly unaware of my presence as I shot this video.

What is the smallest extant species of woodpecker? It is the Bar-breasted Piculet of Bolivia, Brazil, Colombia and Peru. Happily, Harry and I will be visiting Peru in the future, and should I be lucky enough to photograph it, you will see it here. The smallest woodpecker outside the Americas is one I was able to see in Borneo last year– the Rufous Piculet, found in Myanmar, Thailand, Borneo, Sumatra and Java.  Though the fuzzy image below right is far from perfect, the moment of seeing the bird, even at a distance, was sublime. Only the sound of beak penetrating wood made it possible.

A poem by Pablo Neruda:

The woodpecker toco toc:
under the sun the forests distill
water, resin, night, honey,
the hazelnut trees don
galloons of scarlet pomp:
the burned logs bleed on,
the foxes of Boroa are asleep,
the leaves grow silently
while the roots’ language
circulates beneath the ground:
suddenly in the green silence
the woodpecker toco toc.

Handbook of the Birds of the World, Alive 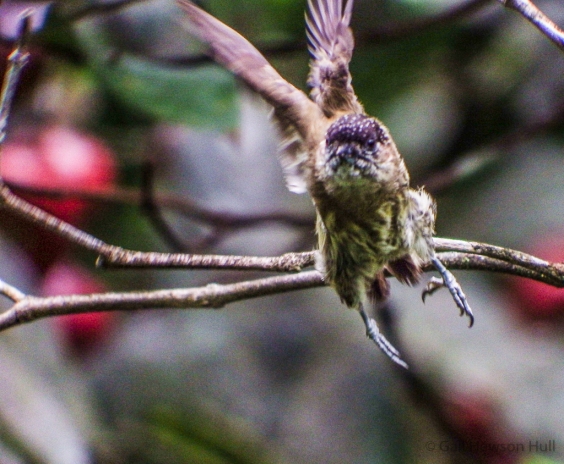