One of the most interesting aspects of living in a nature reserve is that opportunity to observe animal behavior frequently arises. Sometimes an expert comes along to open the windows wider on behavior that previously seemed random and mysterious, if it was noticed at all.

Take the case of the Orange-collared Manakin, a 4” (10 cm) bird endemic to our region that fortunately prefers to frequent low levels just above the forest floor. I knew that males gather to lek each year in small groups of two or three. In the lek system of mating (known as polygyny), it is the female that selects and pursues the male, and the male provides no parental care to its young. The males aren’t passive, however! They perform intricate displays, vocal and visual, to lure females to a neutral location—sites with presumably high female traffic. Their performance determines whether they merit being selected for mating.

In polygyny, whether among Topi Antelope, California Sea Lions, Moor Frogs, Lake Malawi Cichlid fish, or different Manakin species, including the Orange-collared, males can mate with multiple females. No permanent bonds are formed. The most attractive or the most vigorous males will get to do the majority of the mating, while the subordinate males may do no mating at all.

Orange-collared Manakin near the prepared “arena”

I knew the male Manakins display for females between January and March by making loud buzzing noises and snapping sounds with their wings, almost like the breaking of dry twigs. When I first heard this sound years ago I thought some animal was walking in the forest nearby. It took knowledgeable birders to reveal the source of the sound.

Over time with binoculars I managed on occasion to see males zipping with startling speed from sapling to sapling in a specific area of the forest. The only way to see them was to listen first to the buzz-snaps, and then to focus on the area from a respectful distance and hope to see the male’s stunningly bright orange collar, puffed during courtship. The female Orange-collared Manakin is mostly olive-green, with the belly an olive-yellow, and is difficult to spot. I knew also that we had three different areas around the property where the buzz-snaps occur and where courtship takes place each year. With great frustration, I had tried to photograph the males, but had been unsuccessful. They moved too fast, and I couldn’t get close enough.

Last year a researcher named Matthew Fuxjager—who had been studying Golden-collared Manakins in Panama—visited Finca Cantaros; he opened that window for me to learn more about the Manakins. He showed me three different “arenas”, circles about a meter in diameter on the forest floor, where the males had cleaned away leaves to create that neutral location for their displays. Matthew explained that the females watch the displays of prowess from above, and then fly down to the arena close to the preferred male. The pair then fly off to copulate and reproduce. 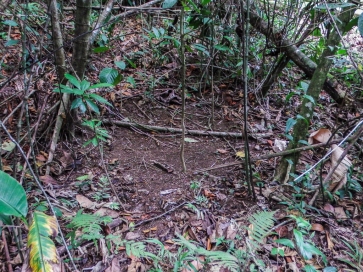 Since taking photographs from a distance produced only blurry images, this year I decided to sit near an arena and take my chances that the birds might ignore me if sat quietly nearby. The strategy worked to a point. This year’s dry season (January to March) has been unusually hot and dry due to El Niño, and the Manakins were quiet until early March. They are unpredictable: I sat for three different hours at different times of the day over a week’s time, but no Manakins approached the prepared arena. On the fourth attempt they did come to the arena at 11:00 AM. Finally, after years of trying, I was finally able to get the above shots. 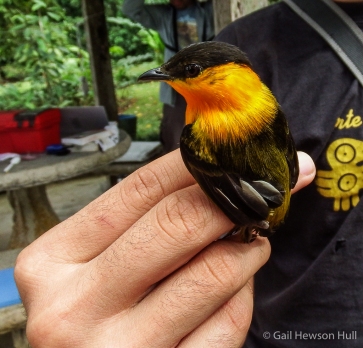 During bird banding days at Finca Cantaros this male Manakin was captured and released in February, 2016.

Why Birds of a Feather Lek Together