Emberá Drua Village on the Rio Chagres in Panama

Boys play along the Chagres River in the 320,000 acre Chagres National Park

Ever open to visiting more tropical forests, in 2010 my husband and I visited Panama City forseveral days and opted for an individual tour to the village of the Emberá Drua people in the Chagres National Park. To get there, we traveled with our guide by car to Port El Corotú, and then in a piragua, a dugout style long canoe from Lake Alajuela, which leads to the Upper Chagres River and the Emberá village. Halfway there, the boatman turned off the motor. Silently pushing his long pole into the riverbed to propel us forward, he took a narrow side river tributary through dense forest to a small white sandy shore, from which we walked under dripping trees to a lovely waterfall with a swimming hole. Epiphytic orchids seemed abundant on the trail. I was in my element. We were completely alone in this spectacular space. 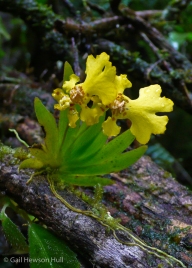 An small epiphytic orchid on the trail

As a young girl I was immensely attracted to everything that jungles had to offer on TV. I think I saw most of fifty-two episodes of Ramar of the Jungle—the White Medicine Man–on Saturday morning children’s TV. There was a Tarzan series the whole family enjoyed. In 1960 I  loved the film Swiss Family Robinson, and soon after was transfixed by The African Queen (originally made in 1951) on TV. In early high school, without telling my parents (because I was fairly sure they wouldn’t think the movie was appropriate for my age), I went with friends to see The Naked Jungle (1954) with Charlton Heston. What could be better than seeing hoards of army ants on the move, surrounding a mean misogynist owner of a South American cocoa plantation. The camera panned between interpersonal dramas leading to murder and the inexorably converging ants by the millions, crossing rivers and eventually…well, you’ll have to see it. (To my surprise, Rotten Tomatoes gives it an 83.)

Guessing which hand holds the prize.

Certainly I was not alone in enjoying movies about African and South American jungles, indigenous people (called “natives” back then, and usually carrying spears), strange languages, wild beasts, reptiles, deadly insects and spiders: a Google search for “jungle movies” reveals hundreds of them were made from the 1920s right up to the recent past with such films as Avatar and even Hunger Games.

All this is mere background to help explain in small part why I left a fine position in San Francisco, CA in 1988 and plunged into development work related to tropical forest conservation, research and education in San Vito, a remote area of Costa Rica. Since then I have become very comfortable in tropical forests (“jungle” isn’t a word used very often in the New World), and even planted some forest of my own at Finca Cántaros.

Back to our visit to the Emberá Drua village. About fifty Emberá people moved out of the dangerous Darien Province of Panama in 1975 and formed a new community, Drua, with special dispensation by the Panamanian government to live in the Chagres National Park if they agreed not to cut down forest for agriculture and to hunt only for their own food needs. Their livelihood would become primarily reliant on tourism. The people agreed to these compromises, because they wanted greater access to health care and education for their children, as well as freedom from pressures of Colombian drug traffickers in Darien Province, contiguous to Colombia’s border.

Woman gazes at her fire in the cooking area of her home. Rough-hewn stairway to her kitchen area.

Our naturalist guide, Harry and I were in a small group of visitors who enjoyed a healthy fish and rice lunch served in banana leaves. A community leader spoke about village society, work and customs. Music followed with dancing young ladies who seemed to enjoy themselves. Of course, this was their work, but they did their best to smile throughout.

We purchased crafts, but declined body painting. We were too busy enjoying the experience of seeing how the Emberá lived: the designs of their homes, the materials with which they made their crafts, and how their children played joyfully in torrential downpours. As our boat motored away from the village shore, we envied the simplicity of their lives, imagining that all our common ancestors lived similarly, so many eons ago.

Children play soccer in the rain.