Over several days in the early morning hours, while passing two small Inga trees and stopping to look at them very closely, I noticed that some of the glands of the compound leaves (called extra-floral nectaries) were being visited by ants. These glands—a common feature of legumes like Inga—produce drops of liquid sugar, and as I looked further around both trees, I noted a number of other kinds of insects were either feeding at a gland, moving between leaflets, or hiding among leaf galls. Stingless bees, flies, miniscule earwig-like insects, a roach, a weevil, two species of beetles, and spiders were all visible, in addition to larvae (Lepidoptera?) rolled up in leaflets. Some insect visitors were certainly getting rewards, but I don’t think they were performing any services to the plant in return. There were no flowers, so no pollination was occurring, and there was herbivory—radical damage to some leaves. Since most herbivory occurs at night, I can only imagine the secretive leaf sucking and mining at Inga sp. during the wee hours.

Beetle (Coleoptera) moving away from the sugar trough

A good friend, landscape designer and native plant aficionado, Karen Arras, gave me the Inga trees as saplings several years ago to plant at Finca Cántaros. She knew they would be good for the soil of our nature reserve that had been previously degraded by cows and pasture. So I wondered what value does Inga bring to reforestation and restoration? Karen said it is a nitrogen-fixing legume in the Mimosaceae family. A lot of legumes, like beans, alfalfa and peas, produce unusual amounts of nitrogen. I accepted this on faith, and gladly planted the trees. 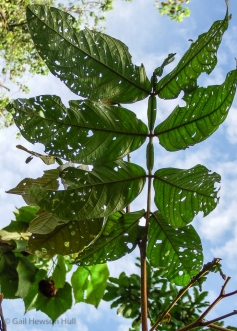 An Inga leaf with eight leaflets. There is one gland between each pair; note herbivory.

Another close friend, restoration ecologist Lynn Carpenter, Ph.D (UC Irvine, retired), told me this week what Inga species have done for her own reforestation experiment, ongoing. In 1992 she purchased 15 miles from Cántaros a large parcel of the most severely degraded, nitrogen-depleted pasture she could find, and then set about designing experiments to determine which tree species could grow and help heal the land. She learned in early trials that an Inga sp. was not only able to survive her eroded, barren soils, but given time, enriched the soil and helped native hardwoods Terminalia and Maria trees grow better. Lynn’s forestry experiments were designed to help local farmers find efficient (low cost) and scientifically-based methods for restoring depleted tropical soils so they can go back to being productive.

Ant drinking at an Inga nectary.

Now really curious about Inga and how exactly it and other legumes fix nitrogen, I asked Lynn to explain it to me. First, she emphasized it’s important to know that nitrogen gas (80% of the air we breathe) is inert in air and air pockets in soil. BUT, certain bacteria can activate the gas and convert it to ammonium and nitrate (think explosive fertilizer), which the tree uses to build protein enzymes. The Inga’s roots release a chemical that attracts the soil bacteria, which invade the root. The invasion stimulates growth of lumpy root nodules that then become the bacteria’s new home. Why, then, does Inga give up to 20% of its sugars to these bacteria? Because it gets usable forms of nitrogen in return! This symbiosis keeps production of proteins by the plant humming. In fact, nitrogen is key to proteins and therefore ALL LIFE! Our beloved protein staple, the pinto bean, another legume vital to the health of Latin Americans, comes from relatives of Inga!

All of this activity is invisible to the oblivious, chemistry-challenged Foto Diarist, blinking in the fog, listening for birds, passing by the Inga trees at dawn. But now I’m pondering, thanks to Lynn’s mental prodding: might all those insects be getting much more than sugar at the glands–maybe some ammonium nitrate and protein, too? Do they get the same payoff from herbivory?

A Roadside Hawk’s whistle pierces the air, and I wander home, intrigued, to breakfast.

For further information about Lynn Carpenter’s project and helpful trees like Inga, go to www.rainprogram.org

Thanks to Federico Oviedo-Brenes of Las Cruces Biological Station we have a preliminary ID: Inga oerstediana, but we are waiting for flowers to be sure. 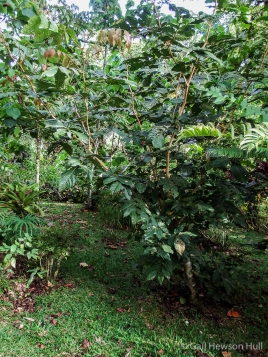 A slow-growing Inga tree. This one is seven or eight years old. At one point it appeared to have died, but then came back to life with many new shoots. 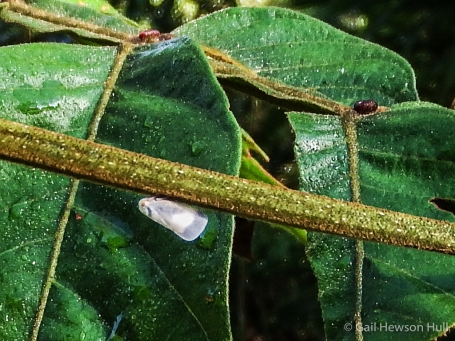